The fight against the elimination of fossil fuel subsidies in Ecuador: Lessons for environmental and social justice

On October 1st, Ecuadorian President Lenin Moreno announced a series of economic measures for the country, including the elimination of gasoline and diesel subsidies and the liberalization of their prices, as part of an agreement with the International Monetary Fund (IMF). These measures led to the eruption of massive nationwide protests for eleven consecutive days, which were met by the government with fierce repression. Despite the repression, protests did not yield and ultimately made the Government back down and derogate these unpopular measures. The protests in Ecuador have important lessons for thinking social justice in environmental policies, and climate policies in particular.

As history has shown us several times, when environmental policies are not thought through from a social justice perspective, they can only serve to perpetuate inequitable structures and marginalize the most vulnerable. The field of political ecology research has been vast in this regard. We have seen how conservation policies in national parks marginalized thousands of people inhabiting those spaces, or how new circular or innovation economies, presented as environmental fixes, do not really respond to the structural problems of the capitalist system that fosters economic growth, the expansion of the extractive frontier, and the increase in global pollution.

Among the environmental fixes proposed to combat climate change is the elimination of fossil fuel subsidies. The logic is simple, but, as I’ll explain later, wicked: by eliminating the subsidy, the cost of fossil fuels increases, which would result in a relative decrease in consumption and, thus, less pollution and carbon emissions. It could also encourage technological innovation for renewable energy and clean combustion vehicles. But if those fixes are implemented in a highly unequal society, as the Ecuadorian one, the next question should be: if the high cost of fuels can restrict consumption, who would then have the capacity to maintain the same levels of consumption and who, with limited purchasing power, would be restricted? And what are the consequences of this? Unfortunately, those proposing these kinds of environmental fixes rarely ask these questions. This tells us that environmental policies that do not tackle social inequalities are problematic, especially because “wealthier people, even the environmentally-aware ones, produce more carbon pollution”.

Here’s an example of this kind of wicked logic. A study conducted by the Inter-American Development Bank (IDB) published in June this year, mentions that replacing fossil fuel subsidies with higher social spending in Ecuador can become an effective tool with triple results: addressing climate change, improving social conditions and solving the country’s fiscal problem. This proposal stems from the argument that, in the past 10 years, Ecuador has spent 7% of its national budget to subsidize fossil fuels in the country. If the government withdraws these subsidies, the social investment deficit and the country’s accumulated debt could be alleviated. To support the environmental argument, the publication cites another study carried out by the IMF in May this year, explaining that the emission of greenhouse gases and other environmental costs are greater than the fiscal cost of maintaining the subsidy. However, estimations for Ecuador are not included in this analysis.

Perhaps ironically, these same organizations have promoted devastating structural adjustments in highly vulnerable national economies across the world. In March of this year, the Ecuadorian government signed a letter of understanding with the IMF to receive US $ 4.2 billion in loans to cover the country’s fiscal deficit. Among the conditioning economic policies imposed, are structural reforms to eliminate subsidies for gasoline and diesel. That represents a price increase of 29.7% for gasoline and 123% for diesel, the latter used massively for public transport, heavy transport of goods and for agricultural machinery. This measure directly affects the subsistence economies of middle-class and poor families in Ecuador by increasing public transportation costs, and would have an inflationary effect on the production costs of food and other daily consumption goods.

The national government never positioned the structural adjustment from an environmental standpoint, but an economic one. Heterodox economists in Ecuador however have warned that the increase in the costs of goods, together with the decrease in the purchasing power of Ecuadorians due to this measure and other neoliberal economic policies taken by the national government, will have an effect on the country’s productive capacity, which will result in a vicious cycle of increasing poverty. This economic phenomenon, together with the reduction in public investment, seriously jeopardizes people’s actual living conditions and therefore negates the IDB’s argument that the elimination of fuel subsidies can create social benefits.

In fact, the IMF’s structural adjustment policies have destroyed national economies across the globe. Research published this year analyzed the structural adjustment policies imposed by the IMF between 1980 and 2014 in 135 developing countries and showed that they increase inequities between the rich and the poor. That is, these economic measures do not solve social problems, they increase them. 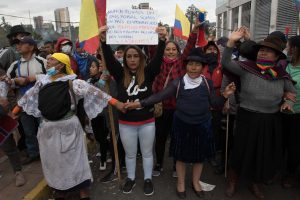 The main justification given by the national government for the elimination of subsidies was Ecuador’s fiscal problem. However, the same economic policies proposed by the IMF included reforms to reduce income tax and other tax exceptions to big companies in the country, the privatization of profitable public companies, as well as the reduction of the capital outflow tax that prevents leakage of capital out of the country in order to protect Ecuador’s balance of payments and the precarious dollarized economy. In other words, if the elimination of subsidies aimed for the alleviation of the economic deficit, it is a contradiction intending to protect the vulnerable economy of the country by implementing other measures under the same IFM agreement favoring the interests of economic elites, to the detriment of most people.

It is understandable, then, why Ecuador erupted in large street protests in the past weeks. The main political actors were the Indigenous movements, peasant movements, labor movements, popular feminist movements, students and the poor. In fact, we have already seen mass rejection of this type of neoliberal policies in other countries. France experienced the “march of yellow vests” in 2018, which included the demand to withdraw economic reforms on fuel prices. Mexico also experienced the “gasolinazo” in 2017 against the same anti-popular policies. In all cases, protests against high fuel prices were based on the disproportionate burden that these economic policies would have on vulnerable groups.

The third goal of eliminating subsidies is related to the climate change fight. While fossil fuel subsidies are a critical environmental issue, any policy addressing them needs to take into account the complexity of the problem, and do so through organized planning, with clear long-term commitments that guarantee social justice. The reduction of fossil fuel energy consumption is a global priority, but it must be considered from a position based on a just transition. In the case of Ecuador, this would imply focalized subsidies for public transport, food and other goods—so as not to affect the great majority of Ecuadorians. It is also necessary to discuss a policy that strengthens the use of public transport, that uses cleaner forms of energy, and that generates the security conditions to discourage private transportation in the country. Although working on these policies is urgent, the reduction of fossil fuels consumption represents mainly a symbolic solution for the country compared to the main carbon emitters in the world. The real challenge for Ecuador is imagining long-term economically just policies that allow keeping the oil in the ground while supporting dignified living conditions and social needs of the people. 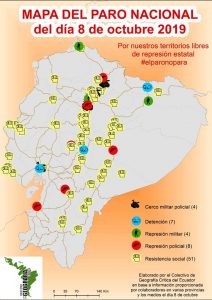 What happened in Ecuador is a reminder that the environmental struggles cannot be separated from social justice struggles. There are several parallels between the two because they face the same structural enemy: a hierarchical and highly unequal socio-economic system. For example, in discussions about climate change there is an appeal to a “shared responsibility,” as those who wish to address economic crises suggest that “we must all shoulder the problem.” In both cases, those responsible for the crises, and those who must bear the consequences and costs of the crises, are different. It is negligent when countries, accountable for most greenhouse gas emissions, assume that developing countries have the same responsibilities to pursue solutions. Likewise, it is immoral to force the poorest to bear the social cost of economic policies from a government that benefits economic elites.

Despite massive protests and nationwide rejection of the IMF policies, some people sensitive to environmental issues supported the government’s economic reforms as they were thought of as important environmental fixes. This type of liberal environmentalism is not constructed from an understanding of the social, economic and political complexities of the problem and only grasps the environmental struggle in a vacuum, in the abstraction of careless solutions. This kind of environmentalism creates a lot of damage because it fuels the structural causes of the problem.

The fight against climate change requires building a new ecological proposal that starts from recognizing people’s material conditions and plural forms of social relations. The common enemy is the capitalist mode of production, that not only usurps the possibility of having a dignified life for people, but also bursts into nature and transforms it into commodities subject to appropriation. It is in this recognition that should guide environmental policies.

This post is republished from Undisciplined Environments. Read the original article here.